There is a real art to crafting a good baby book, especially if one hopes not just to tell a story, but also to captivate completely a very young mind. Though the Gigantic Turnip remains one of Munchkin’s favorite stories, it has become clear that his English-language books do a much better job of stirring his imagination than the traditional Russian tales we have in board book form. It is not a matter of language either; when Munchkin hands D his English-language books, D frequently “reads” them in Russian, and Munchkin still prefers them to the stories actually written in Russian.

Variety may well be the spice of life but, as with food, it takes children some time to develop a taste for the piquant. Not only does Munchkin have several favorite books, but he also wants to hear the same stories over and over. Sometimes the only way to break the cycle and make him get a different book is to quickly hide the one that he insists on hearing on repeat after reading it several times in a row. Rereading the same children’s books multiple times a day will quickly transform anyone into a discerning book critic. Here is a list of our favorites, as well as the ones that don’t quite hit the mark:

Chicka Chicka Boom Boom (Bill Martin, Jr. and John Archambault): Currently Munchkin’s undisputed favorite, this book hits all the right notes. The story of the letters of the alphabet climbing a coconut tree is both fun and educational. The book is vibrant, the narrative rhymes, and the story is filled with fun noises. And apparently there is an audiobook version narrated by Ray Charles! What’s not to love? A++

Moo, Ba, La La La (Sandra Boynton): We have several books by this author, and they are all excellent. This simple and silly tale is a close second to Chicka Chicka Boom Boom for Munchkin’s affections. The combination of animal noises and cartoonish drawings makes the book fun. The rhyme scheme owes to the sounds the animals make, so D frequently translates the story into Russian without losing any of its effect. S reads Boynton’s Going To Bed Book to Munchkin every night before tucking him in. And her Happy Hippo, Angry Duck is a cute exploration of different moods and emotions. Munchkin does not love it as much as Moo, Ba, La La La, but only because the latter sets such a high bar. A+

Peek-A-Who (Nina Laden): Another A+ favorite, this book barely has any actual words, but the cutouts foreshadowing the action on subsequent pages are priceless. The last page is a mirror, and Munchkin never fails to laugh at the book’s final joke (Peek-A-You!) no matter how many times we read it. A+

Dear Zoo (Rod Campbell): Repetitive story-telling works well for young minds, and is also easy to adapt into other languages. This is a lift-the-flap book, and the surprises hidden on each page add an extra level of interest. That the story ends with the family acquiring a puppy works particularly well for us given that we have a dog. A

Moo on the Farm: There is no author credited on this recent Discovery Kids creation. This massive board book comes with a sound panel that plays real animal sounds — much more compelling than when we make the sounds ourselves. Munchkin loves it so much that S bought another Discovery Kids book: Growl with the Animals. Alas, this one did not go over so well. The wild animal sounds proved far scarier than we had anticipated. As soon as Munchkin hears the first wild roar he starts trembling and whimpering, and the first few times the book actually made him cry with fear. We’re hoping he’ll grow into it. A

The Very Hungry Caterpillar (Eric Carle): This book is classic and should need no introduction. S’s mom made Munchkin an Eric Carle quilt before he was born, so he has grown up with this story practically from day one. This is one of the few books he enjoys that does not have a rhyming narrative, which makes it easy for D to tell the story in Russian. A+

Five Little Monkeys Jumping on the Bed (Eileen Christelow): Munchkin appears to be losing interest in this cute sing-along story, but for a while it was a nighttime favorite. We’re betting it’ll stage a comeback once our little monkey becomes old enough to jump on the bed himself. A-

Ten Little Fingers and Ten Little Toes (Mem Fox and Helen Oxenbury): Another cute rhyming story with a good message of cultural understanding (undermined somewhat by its lack of sensitivity from a disability inclusion standpoint). It does not translate very well into other languages and the illustrations leave a bit to be desired. S likes this book a lot more than D does, though the most important thing is that Munchkin enjoys it. A-

Giraffes Can’t Dance (Giles Andreae and Guy Parker-Rees): Here’s another excellent book with heretofore unrealized potential. Gerald the Giraffe is subjected to teasing and bullying by the other animals because he can’t dance. He mopes around, depressed and alone, until a sympathetic soul teaches him to find his own inner rhythm. Gerald dances to the beat of his own drum and all the other animals learn to accept him for who he is. It’s a wonderful moral, the story rhymes, and the illustrations are great, but the book has a bit too much plot development for our one-year-old; Munchkin usually loses interest midway through the story. A-

Counting Kisses (Karen Katz): This book was highly recommended by a friend, but has proved a flop with Munchkin. The idea is cute: give your baby kisses as you learn to count together, but Munchkin squirms when we try to nuzzle him, and now that he’s mobile he does not hold still long enough to get even halfway through the book. B

We’re Going on a Bear Hunt (Helen Oxenbury and Michael Rosen): This is another book with a sound bar. Munchkin runs hot and cold with this one. Sometimes he enjoys the story, but it’s definitely not his go-to, and because the pages are paper rather than cardboard we don’t let him play with it, which for now is a drawback. B+

Time For Bed (Mem Fox and Jane Dyer): Good bedtime storybook, but overshadowed in our kiddie library by the above-mentioned Going To Bed Book. B+

The Napping House (Audrey and Don Wood): Sleep is, understandably, a hot topic of early children’s lit. This story is a classic and features an ever-growing list of slumbering house occupants who are all sadly awakened by a restless flea. It makes for cathartic reading, and Munchkin enjoys it too. A-

Peek-a-Boo Baby (Sebastian Braun): Another good idea that has proved a flop in our household. Given how much Munchkin loves Peek-a-Who, we thought this book, which features a child playing hide-and-seek behind lift-away flaps that include blankets, building blocks, and a big hat, would be an easy winner. Not so. The illustrations lack vibrancy, and Munchkin is just not that into this book. B-

On The Night You Were Born (Nancy Tillman): Not much to say about this one, as it rarely cracks our reading rotation. The idea is a bit sappy (“On the night you were born, you brought wonder and magic to the world.”) Munchkin is not yet self-centered enough to appreciate this ode to his specialness. B- 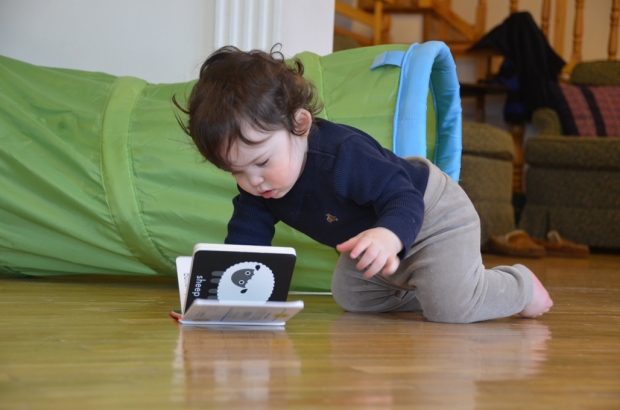 Taking advantage of the long Presidents Day weekend, we went out in search of more engaging Russian books to add to our collection. We have board book version of most of the classic Russian fairy tales, but they have too much text on each page and rarely rhyme. That’s two strikes against at Munchkin’s young age — he simply does not have the attention span to wait for the narratives to advance far enough for the pages to be turned. We visited two bookstores, one of which was dedicated almost exclusively to children’s books, but came away almost completely empty-handed. The books either had too many non-rhyming words on each page or attempted to be educational in a strictly classroom sense. And the books we found with sound bars simply complemented the traditional tales with odd singing that was not only wholly out of place, but also a little terrifying.

S has been scouring book lists and Amazon reviews for more books to add to our collection. There are only so many times one can read Moo, Ba, La La La before one’s mind starts clamoring for an escape from reality. If you have any favorites in your child’s library, please share your recommendations.