Hands down, the top highlight of our most recent trip to the Southwest was a visit to Chiricahua – a little-known national monument that is tucked away in the southeast corner of Arizona, near the border with New Mexico. The park receives between 50,000 and 60,000 visitors a year – less than one-tenth of the number of people who visit nearby Saguaro, where we had spent the previous day. 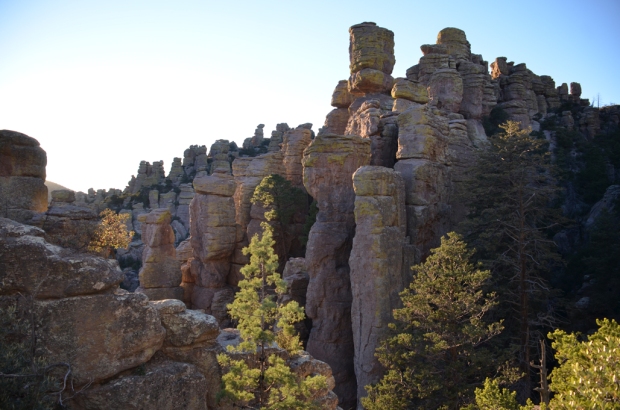 We too probably would have skipped Chiricahua if we did not have to drive 275 miles from Tucson, AZ to Las Cruces, NM in one day. Looking at Google and estimating drive times, one does not get a good appreciation for the immense distances that separate the dots on the map that comprise a sensible itinerary. We only hiked a total of 40 miles during our ten-day road trip – a number that, to be fair, was a bit depressed by the government shutdown. Still, we drove more than 2,000 miles (2,003, to be exact) to complete our loop through Arizona and New Mexico. 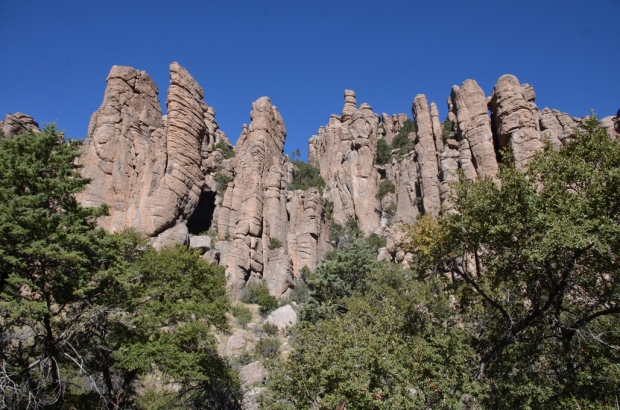 Looking on the map at how I-10 snakes parallel to the Mexican border, D spotted a splotch of green roughly halfway between Tucson and Las Cruces. Whatever the park’s merits, it promised – at the very least – to break up the long drive. One glimpse at the Internet was enough for us to realize that Chiricahua should be on our agenda even if we would have to go out of our way to visit it. 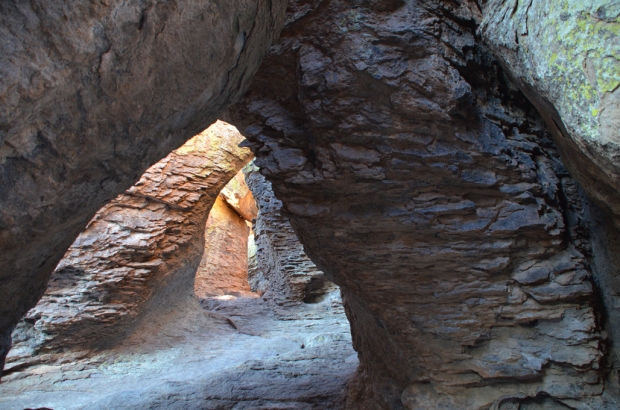 The national monument was established nearly a century ago to protect the Chiricahua Mountains and its extensive array of hoodoos and balancing rocks. Forged by a powerful volcanic eruption millions of years ago and whittled by wind and time, Chiricahua’s rocks provide nearly endless fodder for the imagination. Rocks shaped like animals (in addition to the unmistakable and sign-posted Duck-on-a-Rock, we spotted a dinosaur and a camel’s head) rub shoulders with improbably balanced behemoths and slender stone pillars. 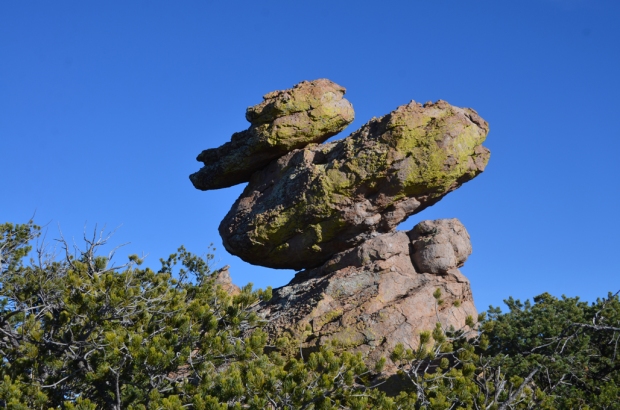 In many ways, Chiricahua reminded us of the landscapes we had seen in Utah – the hoodoos of Bryce Canyon and, even more so, the fantastic rock formations in Canyonlands. The principal difference was one of scale. Whereas one could easily spend weeks hiking around Canyonlands, it is possible to do Chiricahua justice in one day. 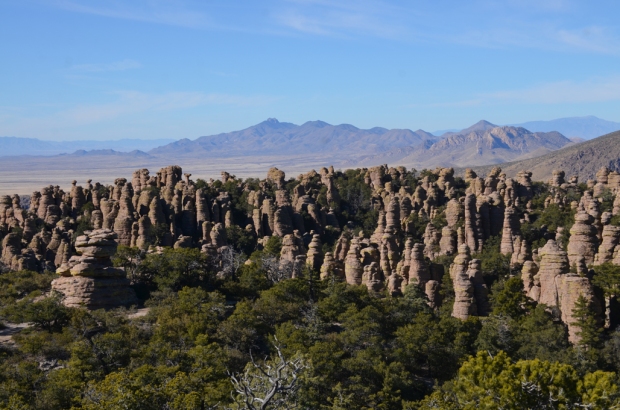 The so-called Big Loop strings together most of the park’s highlights via a series of trails that connect two major canyons. It allows access to a diverse array of vantage points, thus maximizing visitors’ appreciation for Chiricahua’s unique stone formations. A trail that offers vistas across a hoodoo valley will dovetail with another one that leads down into a canyon, with stone towers and big balanced rocks towering overhead, before a third trail leads the visitor up to the next magnificent overlook. 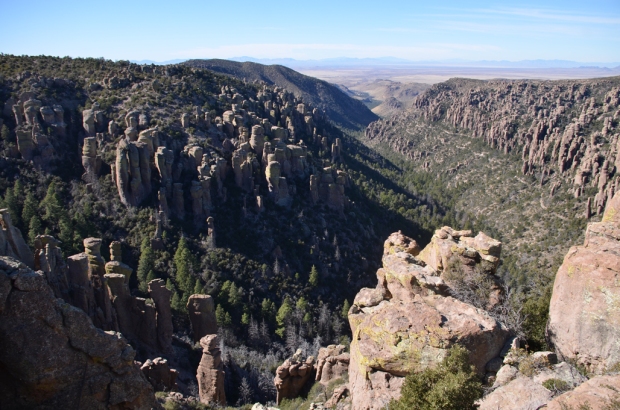 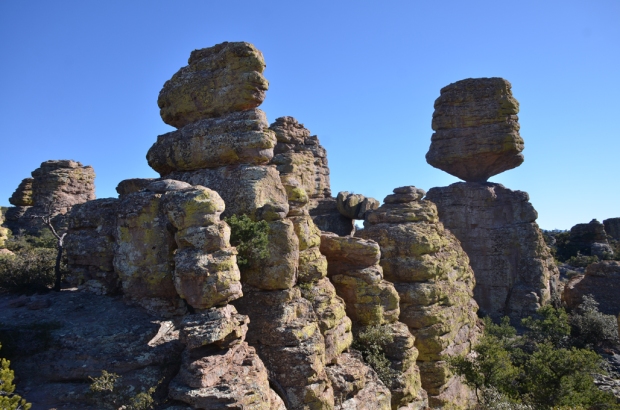 If one tacks on two mile-long side trails – the first up to Inspiration Point and the second into the Heart of Rocks – the entire loop comes in at just under ten miles. It’s a lot of up-and-down hiking, all of it eminently worth it. Inspiration Point opens up a jaw-dropping vista of the main hoodoo-filled canyon, while the Heart of Rocks loop leads visitors on an up-close-and-personal tour of the park’s most unique formations. 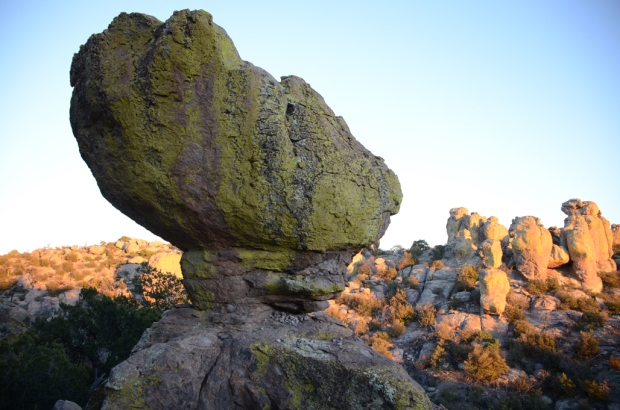 Whenever we come across a gem like this, we always feel ourselves tugged in opposite directions. Should we share our find with others or keep it to ourselves? Granted we visited in the off-season, but the fact that there were hardly any other visitors on the trails in this stunningly beautiful place felt like a luxury. Shortly after our visit to the Tetons this summer, for example, we came across an article describing how the park urged social media influencers to stop geo-tagging their visits to prevent the destruction of pristine habitat. Similarly, we saw firsthand how the “discovery” of the Wave by Microsoft sent so many visitors flocking to a remote corner of northern Arizona that park authorities had to implement a lottery-based permit system.

Ultimately, we decided it would be selfish to keep our adventure in Chiricahua to ourselves. Travel blogs have replaced guidebooks as our main source of inspiration when trip-planning. We feel compelled to return the favor. So if you find yourself in southern Arizona, do yourself a favor and make a day trip to Chiricahua. You won’t regret it. 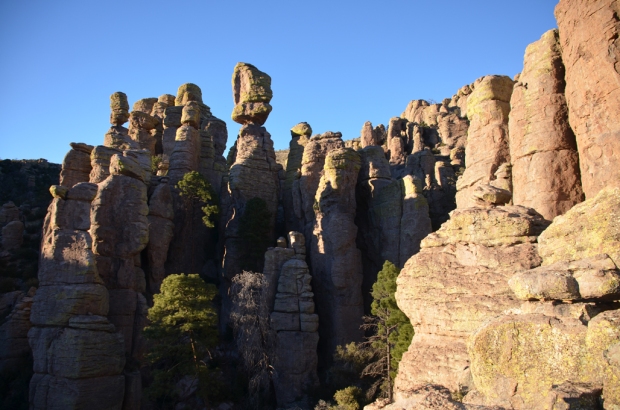