After one final morning in the office – to pay bills, tie up a dozen logistical loose ends, and formally hand over to his successor – D walked the 45 minutes home from the Embassy, something he had been meaning to do but never quite found the time or energy for. He got a bit of the typical mzungu treatment – an exuberant shopkeeper offered passport photos, a handful of kids recited “give-a me money” in heavily accented English, several passing moto-taxis honked to offer a ride – but mostly D was left alone with his thoughts as he soaked in the sights and smells of Kigali one last time. 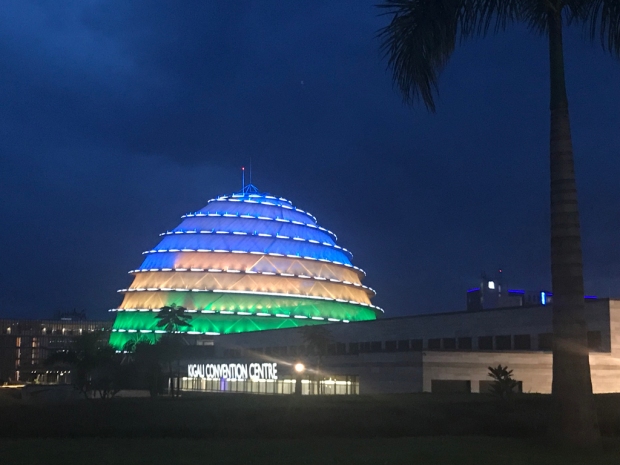 The path to our hill winds from the Embassy down into a cramped, green valley – a bit of farmland in a crowded city. A kingfisher flew overhead, ibises squawked as D passed, herons stalked among the vegetables plots, and the omnipresent kites and crows battled for aerial supremacy over this little patch of green turf. A long-crested eagle looked on regally from his perch on a light pole painted in Rwanda’s blue-yellow-green colors. A few people were weeding their parcels of land, and a small flower market sprawled by the side of the road, a panoply of plants and clay pots on display.

This bucolic scene was undercut somewhat by the slow-chugging trucks and other vehicles that labored up the road on the other side of the little valley, reminding D of the one thing above all others he is glad to leave behind. Getting behind the wheel of a car is a dubious proposition in many of the places we’ve called home over the years. Plenty of other countries have overly aggressive drivers who evince a lack of respect for basic rules of the road, as well as congested, poorly maintained roadways that make one wish the automobile had never been invented. It is therefore prudent to avoid hyperbolic comparisons. Even so, it is fair to say that Rwandan drivers are uniquely bad.

The primary problem appears to be a general lack of awareness coupled with a persistent refusal to look in the mirror and a chronic inability to stay in one’s lane no matter how wide or well marked they are. It is almost as if a magnetic field operated inside the country, inexorably drawing drivers toward the middle of all roadways. This, together with the lethargic pace of most motorists is enough to drive all but the most patient of drivers mad, and patience behind the wheel is not a virtue to which either of us can credibly lay claim.

On the other side of the scale, there are several things we will miss about Rwanda, the friendships we’ve made over the last two years easily topping that list. Departures are always bittersweet, so it helps to keep in mind that the flip side of every farewell is a reunion waiting to happen. And it is the reunions that await on the other side of the Atlantic that make us especially glad to be returning home.