school’s out for summer

The mileposts keep flashing by. Thursday was Munchkin’s last day of school in Rwanda, and yesterday the school held a graduation ceremony, which featured a hilarious, if somewhat bizarre, theatrical production in which the kids wore “bedazzled” underwear and pretended to be aliens.

Munchkin had his full repertoire of nervous/shy mannerisms on display, from spacing out and sticking his entire hand in his mouth, to offering a forced cheesy grin for the camera. However, he also played a much more active role than he normally does in similar all-school productions. He danced and even sang the words to one of the songs, though he refused to join the rest of his classmates in reciting a line from the alien underwear play.

After two full years, it is clear that Munchkin is going to miss this school. He talks about his friends and teachers non-stop, we had a hard time pulling him off the playground, and when we finally got him into the car the first thing he asked was whether we could return to school the following day. It’s great that our departure comes after the end of the school year. Even so, we’re afraid that he’s going to have a rough time transitioning to a new school. On the upside, he seems to be taking our packout in stride, helping us tear down his playroom and put away his things. 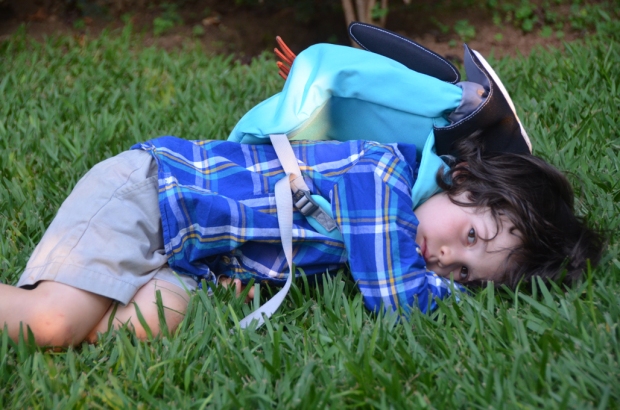 In the midst of our pre-departure countdown, Junebug marked her own milestone, finally taking her first independent steps. Even though she is very strong on her feet and has good balance, she still prefers crawling to walking. She walks quite a bit with her nanny, actually, but whenever we try to capture her early footsteps she either gets too excited or too interested in the camera. We’ve managed to record a couple of short videos, but usually she drops down to her tush as soon as she sees us.

Yesterday was also S’s last day in the office. D still has a week and a half of work before we can sign off on this tour, but S exercised the option to end her position a little early to focus on packing, last-minute errands, and final preparations for our departure. Unlike our previous transitions, this move falls right in the middle of the heavy summer transfer season. Another Embassy family we knew well left yesterday, and many others are leaving within days of our scheduled departure. If transitions seem to be the main theme of our recent blog posts, it is only because they are weighing so heavily on our minds.