“Why is it that every time we visit you something crazy happens?” mused D’s mom with a touch of fatalism. In Ecuador, where D served in the Peace Corps, protesters shut down the country’s major highway during D’s parents’ visit. Violent clashes between protesters and the police took place in a small town in the Amazonia quite literally minutes after D had turned the rental car around to head back to Quito. In Kenya, we also were forced into changing our travel plans on the fly during D’s parents’ visit when we came upon a roadblock and, predictably, angry protesters about to clash with the police. In Rwanda, on the other hand, our misadventures were entirely self-inflicted.

When they visited us in Kenya, D’s parents were happy to spend hours bouncing along rough roads to join us on our safari travels. Five years hence, they seem to have lost somewhat their appetite for sharing our African adventures. When we sent them a list of Rwanda’s parks and potential travel options, they initially expressed little interest in anything other than spending time with their grandson. Eventually we managed to convince them that since Munchkin would join them on all their travels, seeing a bit of the country they had flown halfway around the world to visit might not be such a terrible idea after all.

We settled on two destinations – a weekend visit to Akagera, Rwanda’s only safari park, and a couple of days in Musanze, which serves as the jumping-off point for visits to Rwanda’s famed primates. The trip to Akagera went reasonably well at first. We stayed at the Ruzizi tented camp, which is located in a thicket right at the edge of one of the park’s lakes. It is a scenic location that is hard not to love, and D’s parents were charmed by it. The swarms of tse-tse flies that plagued us on our first visit to the park had given way to scores of butterflies, which was also a nice improvement. 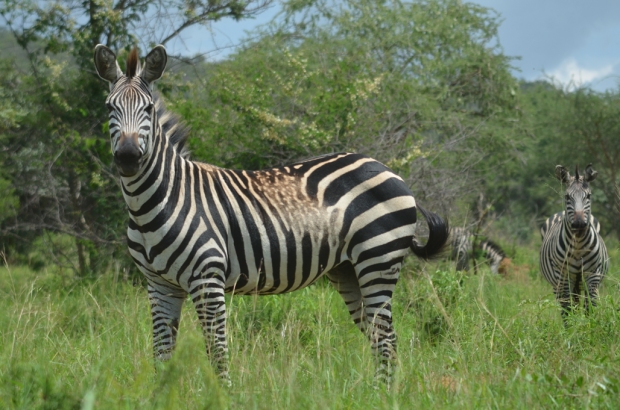 We ran into trouble, however, when we attempted to criss-cross the park south to north on the last day of our stay. The park’s maps and signage leave quite a bit to be desired – some markers that appear on the map do not exist in real life, while the markings on the ones that do are, at times, needlessly confusing. We had not visited this part of the park on our only previous visit to Akagera, and at some point took a wrong turn. 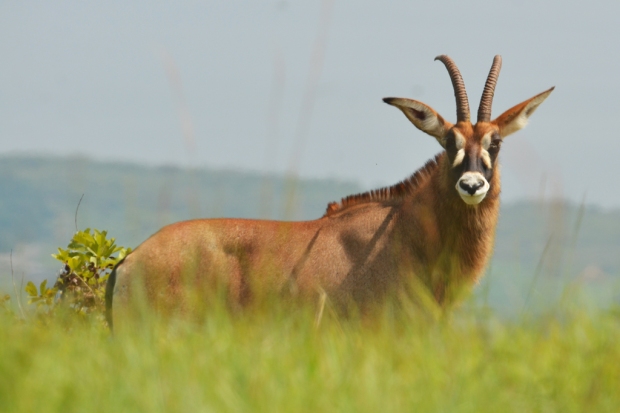 What should have been a pleasant drive close to the lakeshore turned into a bone-jostling traverse across a poorly maintained, very rocky mountain road. We did see some cool birds – D recorded thirteen species that were new to us. We also saw three of the park’s elusive roan antelope – this was a first even for us. However, these sightings did little to ease the concern emanating from the back seat as our Rav4 creaked and thudded across a seemingly endless series of huge boulders and hidden potholes whose presence was masked by wild vegetation.

Whereas losing our way in Akagera is somewhat excusable, forgetfulness and carelessness are the only ways to explain the wrong turn D took on the way to Musanze. There are two major roads running north and D took the wrong one, only realizing his mistake when – an hour and a half later – he approached the border with Uganda. D had planned to make a lunch stop at Sorwathe to give his parents a taste of Rwandan tea. The plantation and guest house lie among the hills and valleys that separate the two main northern roads, and while it’s possible to reach Sorwathe from either road, the way from the road D had mistakenly taken was infinitely more painful.

It took the better part of two hours for D to navigate the rough, mountain roads that connect northern Rwanda’s many anonymous villages. It was a great way to get a real taste of the countryside, but considerably less so when weighed against D’s parents’ initial reluctance at venturing far outside Kigali.

By the time they reached Musanze, D’s mom had reached her limit and decided to cut the stay short by a day. D had been planning to take turns with his parents, taking first one and then the other to see the golden monkeys we had visited in December. In the end, he only wound up making one trip with his dad, who enjoyed the muddy slog deep into the bamboo forest, but averred over and over that the trek would not be to D’s mom’s liking.

Stressful though the visit was at times, there is a silver lining. On the way to the airport for their return flight to the States, D’s parents announced that very likely they would like to visit us again the following year, and maybe even do a little more travel together, our misadventures notwithstanding.