This is a tumultuous time for S at the office. A few hours after Munchkin’s birthday party wrapped up, she was on the plane headed to DC for a weeklong conference. And while D did not appreciate being left to clean up the post-party mess, the week of quality father-son time alone with Munchkin easily made for it.

Two of the presents Munchkin received from his friends were remote-controlled toys. The first is a fire truck, which proved a great gift. Not only does Munchkin still adore fire trucks, but he also got a huge kick out of the remote control. The other is an airplane, which wailed up a storm as soon as it was turned on. It is also considerably faster than the fire truck. D put in the batteries and gave it a spin around the kitchen, which sufficed to terrify Munchkin out of his wits.

“I don’t want to turn it on; we have to play with it slowly. If you turn it on, Emmie will be scared,” Munchkin told D the following morning. “And I will be scared too,” he added after D gave him a quizzical look. “I’m not good for airplanes,” he offered a few minutes later, apropos of nothing. “I’m good for fixing fire trucks when they broke. Papa, I don’t want помочь. I don’t need help.”

The new loud toys notwithstanding, the house has been considerably quieter this past week. Munchkin does not give D anywhere close to the same amount of grief he reserves for S – there have been exactly two minor meltdowns during the last week, and one of them was the result of Munchkin skimping on his nap and waking up upset. Otherwise, he has been a dream child – sleeping in his bed through the night, playing independently, and – in all likelihood – saving up his tantrums for when S returns. 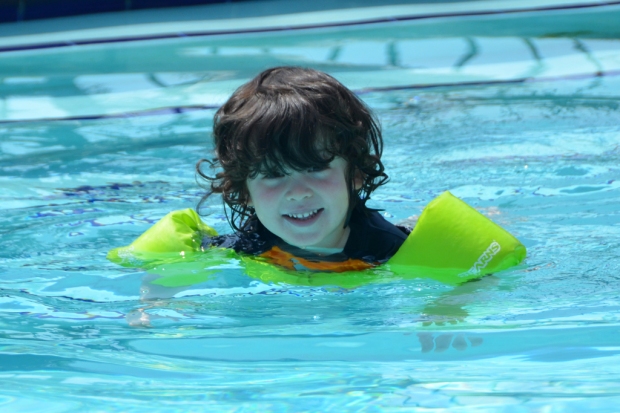 Now that he has started his fourth year, Munchkin is exhibiting new signs of greater maturity. He learned our names and those of his grandparents, though he hilariously butchers D’s dad’s name. He knows he’s doing it too, because he can’t say the mispronounced name without bursting into uncontrollable giggles. He recently became more daring in the pool – swimming and jumping in on his own if he has his floaty on.

He also has solidified his grasp on numbers, both in Russian and English, and it’s not just rote repetition either. Several months ago, Munchkin had taken it upon himself to give Emmie her dog food. A few days ago, D watched him overfill Emmie’s bowl. “Alright, that’s enough,” D said before asking if Munchkin knew how many scoops he was supposed to ladle out. “One, two, flee” he said correctly. “And how many did you give her?” “Пять (five),” he answered slyly.

Three is a fun age, and though Munchkin’s grasp on English is much improved, he continues to come up with amusing new words. Kawanda is one he’s been saying for a while – a mixture of Kigali and Rwanda, and a frequent answer when we ask him where he lives. Popcake is another – a cute take on the cupcakes S baked for his birthday.

Much as he torments S when he’s with her, Munchkin also clearly misses her when they’re apart. D sometimes wonders whether he asks for him during his own absences; it doesn’t seem likely. “Papa, I am missing mama,” Munchkin told D their first morning alone. “Papa, count! Mama will be back in one minute,” he’s said more than once since.