Our research on Namibia’s tourist hotspots notwithstanding, we knew precious little about the country where we had decided to travel for two weeks.

One of the continent’s younger countries, Namibia only received its independence in 1990. Occupied by the Germans in the late nineteenth century, the Namibian territory passed into British hands following Germany’s defeat in World War I. Despite the victory, the Brits had already begun the process of disengaging from their African colonies, so the territory passed to the fledgling South African government. South Africa never realized its hopes of annexing Namibia outright, but it did rule the territory as a protectorate for the better part of the twentieth century, treating it as a de facto province.

This tortured history remains close to the surface in present-day Namibia. Although English is the country’s official language, many of the towns retain their Afrikaans names. Germans, who for a brief time controlled the territory, now maintain an outsize presence among the country’s tourist visitors. Namibian beer, which is brewed to the exacting German purity standards that Germany reluctantly abandoned in deference to the EU, is excellent. And, naturally, it will take more than a generation to eradicate the legacy of apartheid, which the South African government had exported to its protectorate territory.

Sensing our interest, Franco, our affable guide, gave us a primer on Namibian history as we drove towards Daan Viljoen our first morning and was always happy to tell us more during the many hours we spent in the car together. Its turbulent history aside, what struck us most about Namibia is how vast and empty it is. Namibia is more than 30 times the size of Rwanda, but only has a population of slightly more than 2 million inhabitants – about one-sixth the number of people who live in Rwanda. It seems hard to fathom that 10 million more people call the tiny, hilly Rwanda home. 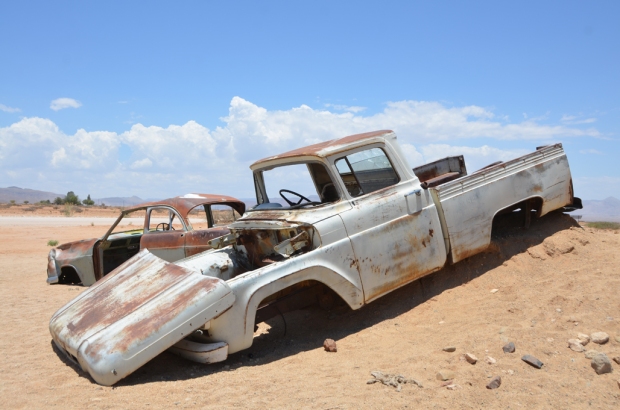 Driving past immense stretches of monotonous, unoccupied land would surely get tiring if we called Namibia home, but coming from Rwanda the flat, desolate landscapes felt like heaven. Here it is virtually impossible to drive faster than 80kph – both because the roads in Rwanda are hilly and serpentine and because there are so many people everywhere that the foot traffic spills into the roadways. In Namibia, by contrast, the roads are straight and empty.

The other thing that impressed us was the variety of Namibia’s desolate landscapes: the red sands of the Kalahari desert; the enormous dunes of the Namib – the oldest desert in the world, to which the country owes its name; the scrubland in between. And just as amazingly, all this apparent emptiness is teeming with life. The land may not support human habitation, but there is a seemingly endless variety of birds, reptiles, and plants that are quite happy to claim the land as their own.