when the cat’s away

Secretary Kerry’s visit to Kigali and all the prep that it entailed is only part of the reason our blog has been silent of late. We also took our first family trip around Rwanda the weekend before the Montreal Protocol. When we returned to Kigali, S simply repacked her bags, first going to Nairobi for two days, and then traveling back to Washington, D.C. for a weeklong conference.

Munchkin had reached the height of his mama clinginess in recent weeks, and S was equally worried that he would either spend his evenings crying for her or – even worse – want nothing to do with her when she eventually returned after a prolonged absence. He did cry the first night, spending about five minutes in bitter tears when he saw that D had come home from work alone. He just stood there, clutching his stuffed animal and bawling that he wanted his mama.

The rest of the evening went ok, but then Munchkin woke up in the middle of the night and wouldn’t go back to sleep until D brought him into his bed. “Where has my mama gone?” he inquired matter-of-factly the next morning, apparently at peace with his new mama-less reality. The rest of the nights had gone smoothly until yesterday, when Munchkin awoke with a start just as D was heading upstairs to go to bed. 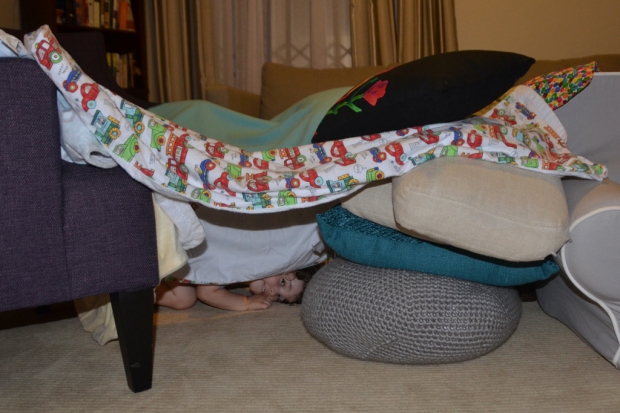 “What’s that, papa?” Munchkin inquired, pointing to a dark corner of his bed as he rubbed sleep out of his eyes. No matter how often D reassured him that the bed was empty except for his stuffed animals, Munchkin would not be convinced. “It’s a seal papa, what’s it doing in my bed?” “It’s scared,” he added trembling, clearly unnerved by the scary seal he had apparently glimpsed swimming in his bed. Only once he had consumed a bowl of Cheerios and reexamined every inch of his bed, did Munchkin agree to go back to sleep.

Thanks to considerable help from our housekeeper, single-parenting thus far has gone quite a bit smoother than D had feared it might, though the last week has not been without a couple of awkward moments. For example, D wound up taking Munchkin to a last-second, after-hours meeting at a coffee shop and had to interrupt his interlocutor several times in the middle of a serious conversation because Munchkin declared loudly that he needed to use his potty.

Though he is definitely looking forward to sharing the parenting burden again once S returns, D has also tried to make the most of being the center of Munchkin’s universe for a change: reading more Russian books at bed time, doing puzzles with Munchkin, soaking up his cuddles, and playing all sorts of silly games in which he usually does not get to partake because Munchkin typically prefers S’s company.