While we’ve been busy reminiscing about our summer vacation, autumn has descended on Chisinau in all its vibrant glory.

We moaned through a couple of weeks of sour weather – gray, rainy days and temperatures so frigid that they gave the impression that Moldova would skip from summer straight to winter. While the mornings have remained chilly, sunshine has once again returned to Chisinau, making for the kind of crisp, colorful days that beckon one to spend as much time outside as possible before winters sets in.

With open woodland just a few minutes’ walk from our house, we did not have to go far to enjoy the changing foliage. On Saturday, S strapped Munchkin into the carrier while we took Emmie for a walk in the woods. Sunday, we let Emmie roam free while Munchkin had an outdoor play date with another Embassy infant, B, who is one month his senior. 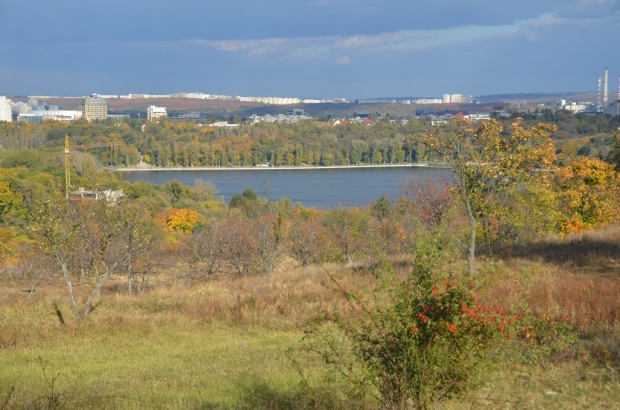 The Embassy community is small, but there are a surprising number of other young babies, to whom S refers as “Munchkin’s friends” whenever she arranges a play date. D scoffs at the notion of infant friendship, especially when the babies are so young that they cannot control their own body movements. The first time B’s parents brought him over to our house, he could only crawl backwards while Munchkin had yet to learn to crawl in any direction. Placed on the play mat together, they stared at each other as the distance between them slowly grew wider. Eventually they lost interest and occupied themselves with the toys we had put out.

A couple of months have passed since, and there was a lot more interaction between the two babies when we sat them next to each other this time. They shared a dried leaf, poked at each other; B grabbed a hold of Munchkin’s hat, which elicited a grunty whimper as the Munch tried unsuccessfully to crawl away. At this age, one month makes a huge difference. Once separated, they mostly kept to themselves, crawling around on the dry grass and playing with the fallen leaves.

Last year, it snowed in October. Hopefully, this year’s gorgeous fall weather is the harbinger of a milder winter. 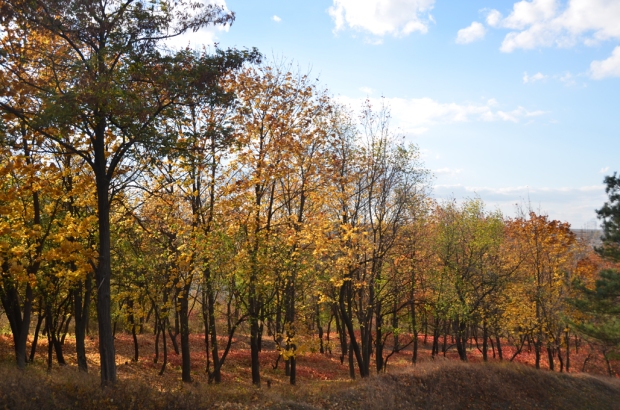