a day in Ljubljana

We arrived late, the dusk catching up to us on the outskirts of Ljubljana an hour or so after we had crossed the Croatia-Slovenia border. Although our first impressions of Slovenia were based entirely on the drive to its capital and the five-minute walk we took from our hotel to get take-out dinner, we saw enough to realize that there were major differences between these two neighboring countries that for half a century had been yoked together under the Yugoslav flag.

From Plitvice, the road meandered slowly through some of Croatia’s poorest and most war-torn areas before linking up with a highway outside Zagreb. The landscape changed noticeably once we crossed the border. Even from the backseat of the car, Slovenia seemed quaintly charming. We passed hamlet after tiny hamlet, each adorned with a thin steeple-crowned church. 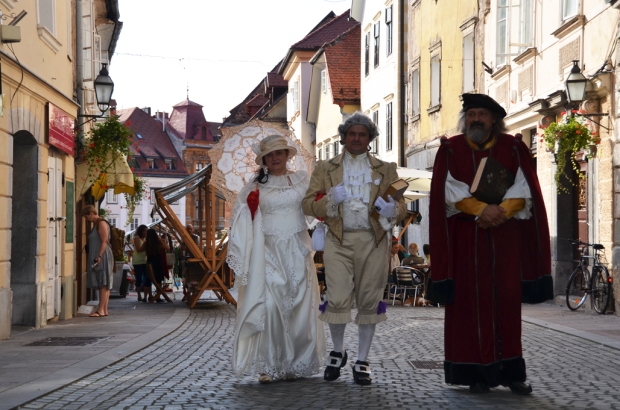 Ljubljana also was palpably different than Croatia’s walled coastal cities, which we had toured for the previous two weeks. While the latter gave off a vibe of museum-like preservation, Ljubljana felt rawer, grimier, more like a real, inhabited city. We stayed at a B&B that was a five minute walk from the historic city center, but the walls of our neighborhood were covered in graffiti and the streets lined with pubs and hole-in-the-wall fast food joints.

Slovenia is small, but there is a lot to see and do, and because the driving distances are so manageable, the temptation is to try to cram in more sights and activities than is probably advisable. We crafted a jam-packed itinerary, giving ourselves one day and two nights in the capital — just long enough to repack, recharge our batteries, and see a little bit of the city before picking up our rental car and heading to the countryside. 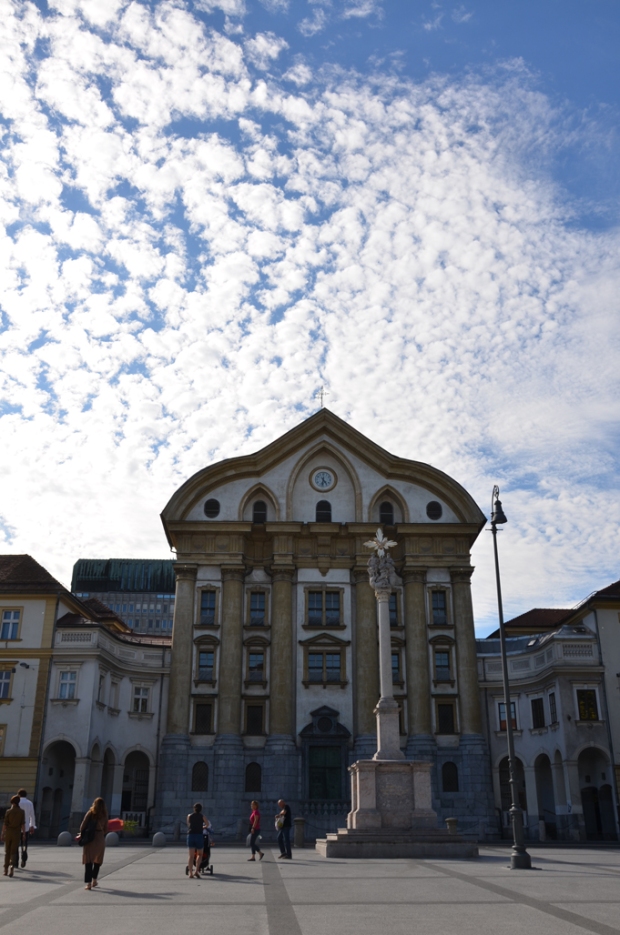 We were fortunate to be in Ljubljana over a summer weekend because the tiny capital was bursting and bubbling over with life. There were interesting monuments, churches, and historic sites to see as well, but what we loved most was all the non-touristy diversions that imbued Ljubljana with a vibrancy Croatia’s coastal cities lacked. A Mexican mariachi band serenaded visitors in one of the main squares, the fruit & vegetable market spilled over into an artisanal food festival, and there were two competing art fairs the day we were there.

A narrow river bisects the heart of the city, which is comprised of several pretty squares. We ambled along its shores, crossing back and forth over Ljubljana’s many bridges. Much like Split, the city is filled with small photographic gems, mostly in the form of contemporary sculptures and creative artwork sprinkled liberally throughout the historic center. When we tired of walking, we simply retired to one of the riverside cafes and enjoyed the good vibes with a beer in hand.

The food fair proved our favorite part of the day. We happened upon the produce vendors first and were happily enjoying the various fresh fruits we had purchased when we realized that a small adjacent plaza was full of stalls offering amazing artisanal fare. We sampled truffle ghee, sheep’s milk yogurt, more varieties of different cured meats than we could count, and so many other delicious foods that we wished we had skipped breakfast. D even bought some wild boar salami whose potent fragrance perfumed our luggage while we spent a week circumnavigating the Slovenian countryside.

It was late in the afternoon by the time we made our way to the funicular for the short ride up to Ljubljana’s iconic castle. Our friends and our guidebooks alike made it sound as if the castle was not to be missed, but to tell the truth we found it a bit underwhelming. Strategically located on a hill overlooking the city, it did offer spectacular panoramic views, but not much else. There was some unremarkable artwork displayed in one of the empty castle chambers, and a decent museum of Slovenian history occupied another cavernous space beneath the viewing tower.

After spending a full day walking around the city, we wished we had had more time in Ljubljana. Knowing that we’d need the rest of the week to visit all the other parts of Slovenia we ached to see, we had no regrets about the way we had budgeted our time. Still, there were so many other places we did not get a chance to explore — an art/punk space that is the hub of Ljubljana’s nightlife, the Tivoli gardens, some Roman ruins — that we could have easily spent several days in Slovenia’s capital.