With S’s due date rapidly approaching, the baby could literally come any day now, which makes for an unusual state of mind. On the one hand, we still make plans to spend time with friends and family. Yet at the same time we are trying to be realistic, knowing at the back of our minds that the baby can decide to make his appearance at any moment and that it is quite possible that we won’t keep any of our plans. 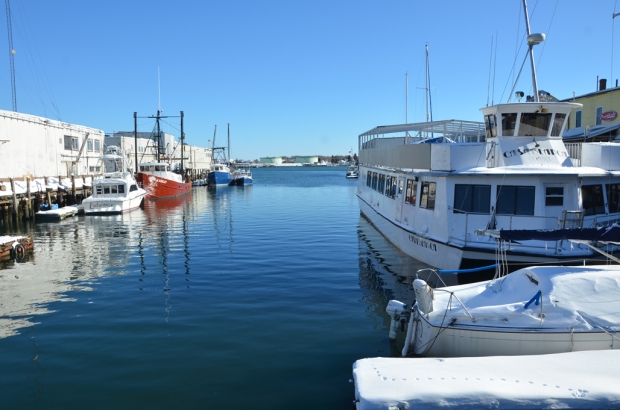 We hedged our bets in booking D’s return ticket three weeks before the due date, which we hoped would give us time to see both sets of parents and also take care of a few last-minute preparations. En route to Bangor to visit S’s family, D had a date with an orthopedic surgeon, who gave us mixed news. D’s thumb fracture is mending nicely and should be all healed by next week. Unfortunately, it also appears that D has a ligament tear, which prevents him from bending his thumb and will take 3-6 months to heal fully. The doctor outfitted D with an ultra-modern gauntlet cast that is light, breathable, removable, and a vast improvement on both the splint he received at the Embassy and the old-school plaster cast from Ukraine that had preceded it.

We may not be in control of the baby’s timing, but at least we planned the visit to Bangor well, arriving right before the start of a blizzard that dumped a foot and a half of snow on northern Maine and returning to Portland just as another snow storm was getting underway. Entertainment options are somewhat limited this time of the year, but we endeavored not to be cooped up indoors the whole time. The storm let up just enough for us to go snow-shoeing in the forest, and D also caught a UMaine hockey game with S’s dad.

We had barely unpacked our bags after returning to Portland when D’s parents arrived for a weekend visit. Coincidentally, D’s sister was visiting her husband’s family in Boston at the same time and they also drove up for half a day. We’re not sure whether surprising D’s parents, seeing us, or eating Maine lobster was the biggest contributing factor in her decision to come, but we did spend the bulk of her brief visit eating an extended lobster-filled lunch.

Portland has a ton of cute shops in addition to its great restaurant scene. We stopped in a few antiques stores and designer boutiques with D’s parents, and lost ourselves in a vintage used book store for an hour before driving out to the Back Bay and going for a very chilly walk along the water. We thought we would do more exploring, taking D’s parents to one of Portland’s cute neighboring towns or going out to one of the islands in the bay for a day trip, but somehow time flew by and before we knew it we were hugging goodbye as they headed back to Connecticut. We talked about doing a day trip ourselves, but with things as up in the air as they are and Portland getting pummeled with more snow this week, it might not happen.

The due date is just an estimate, of course. The uncertainty of the timing means that try as we might to live each day normally, we’re really just in a big holding pattern, waiting on S’s body to decide that it is ready. And that’s a challenging adjustment, particularly when one is used to being in control of one’s life.