We had been counting on a quiet night in last Thursday. It was going to be our last night together for two weeks. D was planning a weekend trip to Western Ukraine over Labor Day to play ultimate while S was going to spend some time with her family, who were traveling through the Netherlands and Germany. Instead, we wound up driving an hour and a half to watch a soccer game in Tiraspol, the capital of Transnistria. 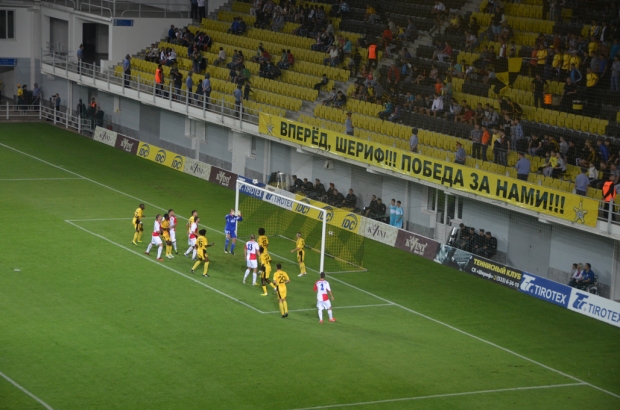 Moldova, a land-locked country about the size of the state of Maryland and with a population of just over 3.5 million, contains two autonomous regions. The status of Gagauzia, in the south of the country, is formalized by Moldova’s constitution. The fate of Transnistria, on the East bank of the Dniester River, is far less clear. There is a de facto government and the breakaway region has its own currency. To enter Transnistria one must pass through checkpoints manned by military border guards. However, Moldova refuses to recognize the region’s independence and almost a decade of talks have been unable to unlock the stalemate.

One of the few things tying Transnistria to the rest of the country is soccer. Not only does Tiraspol’s F.C. Sheriff play in the Moldovan soccer league, but it is also far and away the league’s best club and the current reigning Moldovan champion. The Embassy has a good contact among the club’s ownership who sometimes reserves a handful of VIP box tickets to the team’s matches. Last week Sheriff was playing the second leg of the last qualifying round of the UEFA championship, and the Embassy received half a dozen tickets to the game.

At first D figured that his better half would not be interested in going. He ignored the email from the Embassy’s CLO, and other colleagues quickly snatched up the tickets. But then a couple backed out of the game at the last minute, and D decided to try convincing S that this would be a fun outing. It’s unclear whether she was ultimately swayed by the promise of fruits and chocolates in the VIP box or by the simple fact that D really wanted to go.

We left straight from the Embassy, arriving after a few few zig-zags through the countryside at the Transnistrian border. We were in a bit of a delicate situation: on the one hand, we are not allowed to bring our passports to a region whose autonomy the United States does not recognize; on the other, we had been in Moldova so little time that we did not have residence cards yet. We brought the passports just in case, but when the border guard asked for our IDs, D handed over his Embassy badge while S used her Maine driver’s license. This was not enough, and after a five-minute wait the guard returned to demand additional identification. D took out the passports, but did not hand them over, flipping over to the bio page while making it abundantly clear that the documents were not going to leave the vehicle. The guard could have denied us access to Transnitria altogether, but he knew enough not to reach in and try to take the passports. After deliberating, he went back to his superiors and ultimately allowed us to cross the border.

His first week in Chisinau, D went to the Moldova — Andorra international friendly. The 1-1 tie was almost comically woeful, the ineptness encapsulated perfectly by a Moldovan forward missing a wide-open goal from about 6 feet out. We had low expectations for the level of play, which were entirely fulfilled by the first half of the Sheriff match. The Tiraspol team had tied their opponents 1-1 the previous week in Serbia and seemed to be working towards a 0-0 draw, which would ensure their passage to the UEFA group stage. The second half proved a lot more exciting, with Sheriff scoring twice before F.C. Vojvodina pulled a goal back a few minutes before the game expired.

The result means that there will be at least three more European matches at the Tiraspol stadium, which D will naturally try to attend.