Although the rainy season should have ended a month earlier, its vestiges clung to Reunion with obstinate tenacity. We had gotten lucky during our climb up Piton de Neiges, but the weather proved to be less than accommodating the following day. We had planned to hike up to Col du Taibit, a pass in the mountain wall that separated the Cilaos and Mafate cirques. From there, we intended to walk down to Marla, the first settlement in Mafate, which is rumored to be even more spectacular than Cilaos, no doubt owing some of its mystique to the fact that it can only be accessed on foot. Unfortunately, by the time we reached the pass, clouds had completely enveloped the mountaintop. We ate our lunch, hoping that the mists would dissipate, but to no avail – the extent of Mafate’s beauty would remain a mystery to us.

Thwarted by the weather, we returned to Cilaos. We had read that a thermal spring runs underneath the city and were looking forward to a long soak to soothe our sore muscles. Unfortunately, the Thermes de Cilaos resembled a nursing home much more than the spa it claimed to be. Attendants, wearing nurse’s uniforms and rubber gloves, bustled around, helping patrons who were either in wheelchairs or using various walking aides. There was no pool of thermal water; instead we had to purchase a tightly-regimented treatment. After much deliberation, we opted for a “thermal bath for two with hydromassage.”

An attendant whisked us away, leading the way to a tiny, oddly-shaped room that was just big enough for the futuristic-looking bathtub that occupied it.  “You have twenty minutes,” she informed us, pushing some buttons on a console before exiting the room. The bathtub whirred to life, its murky brown water lit up by alternating red, green, and blue lights. For the next twenty minutes, we sat apprehensively in the tub, pummeled by jets of lukewarm water while being treated to a bizarre light show. The console ticked down the time … “this bathtub will self-destruct in 5 minutes.” In fact, when our twenty minutes were up, the tub virtually did just that, shutting off the jets and draining itself. We left in a hurry, feeling somehow cheated by the whole experience. 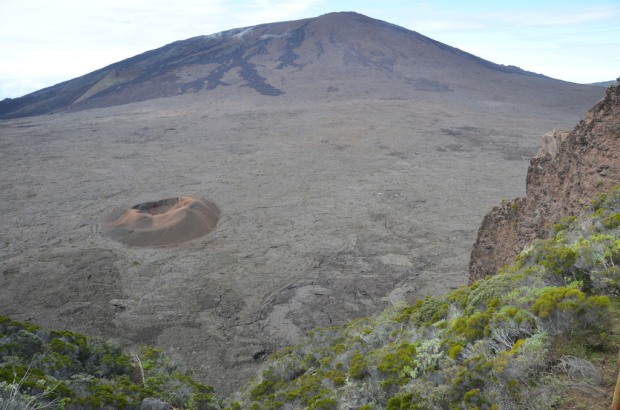 From Cilaos we made our way to Piton de la Fournaise, an active volcano whose recent eruptions do not prevent hordes of tourists from hiking down to the lava fields and across the charred landscape to peek into its crater. We had been intending to wake up before dawn to beat the crowds, motivated by a fellow canyoner’s description of the imposing beauty of the sun rising over the vast, empty caldera. However, D fell ill as we were leaving Cilaos. For the better part of two days, he was laid low with a headache that at times got so bad that it made him nauseous. Foregoing the hike, we drove out to the volcano after a late breakfast and went for a short walk that took us from the viewpoint to the rim of the crater. Clouds started rolling in as we made our way back to the car; by the time we reached the parking lot, the mist had completely obscured the volcano from view.

The last stop on our itinerary was Trou de Fer, a horseshoe–shaped waterfall D had glimpsed in one of the island maps we acquired at the airport tourism desk. This was by far the wettest and muddiest hike we did, requiring three full hours to make the round trip over merely 2600m of trail. Although our view of the waterfall was not as spectacular as the one featured in the map (an aerial shot likely taken from a helicopter, several of which buzzed around Trou de Fer while we were there), we considered ourselves fortunate to have a view at all. Thin wisps of cloud were swirling around the viewpoint and by the time we returned to the trailhead, thick clouds had once again blanketed the countryside.

Tired of fighting the clouds, we made our way back to St-Leu. Seeing Marie and Pascal again felt like seeing old friends. Although our flight to the Seychelles did not depart until early evening, we had had enough adventures for one week and were content to spend our last day hanging out at Caz Oceane.