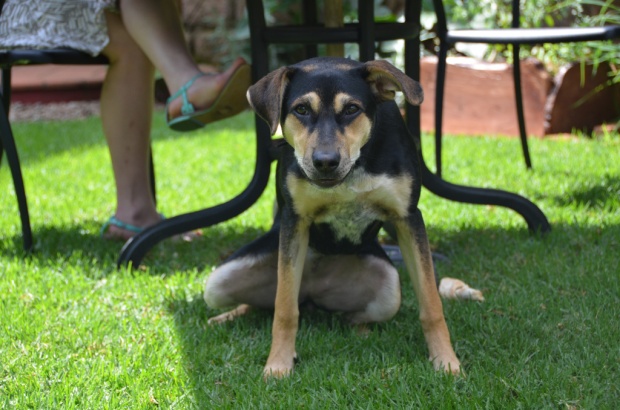 Emmie is relatively well behaved at home. She understands sit, down, stay, and also recently learned leave it. Unfortunately, she does not always listen. And if she realizes that no treat is forthcoming, she takes her sweet time obeying our commands. As she has adapted to her new home, she has also grown a bit willful, which prompted us to enroll her in obedience classes.

We must confess that we felt a bit like the characters in Best In Show when we first showed up with Emmie at the puppy training class. The trainer stands in the middle of a large circle while all the dog owners line up around her with their pets. For an hour every Saturday morning the place is the scene of orchestrated chaos. We walk our dogs clockwise, then counterclockwise, stopping periodically to make them sit, stay, etc. Some of the dogs bark and snap at other dogs. Some of them, Emmie especially, seem to think that class is synonymous with playtime and tug incessantly in an attempt to play with other dogs.

Unfortunately, our belief that we had an obedient puppy was quickly dispelled. It’s quite easy to get Emmie to sit or lie down when she knows we’re holding her dinner in our hands. Getting her to obey when there are twenty other dogs around is a whole different story.  Plus, the class is held on a farm, so in addition to all the dogs and people, there are all sorts of smells to distract our already inattentive puppy. Even using such high-value treats as bits of cheese and chicken seems to only marginally improve her attentiveness. At the suggestion of our dog trainer, we are going to switch to a different harness in the hopes that Emmie won’t tug as much. In the meantime, the most we seem to be getting out of this class so far is a good arm workout.

Tags: Emmie, pets, photography
From: Family
← one by one
the joys of social sponsoring →
No comments yet