One cannot talk about driving in Kenya without mentioning matatus, the beat-up, barely functioning (in fact, the economic lifespan of an average matatu is only five years) minibuses that provide most of the public transportation and are responsible for the vast majority of the accidents in Nairobi. Named after the number 3, tatu in Swahili, because they used to charge just 3 shillings a ride, they are privately owned and make their money on the frequency of their trips. Apparently, the matatu industry is regulated, but as with everything else, “regulation” in Kenya is synonymous with opportunity for graft and corruption rather than with increased public safety. Typically driven by young guys pumped up on khat, matatus zoom around the city, competing with each other to squeeze in extra passengers and complete their routes in record time. Khat leaves produce an amphetamine-like stimulant when chewed, which causes euphoria and a loss of appetite, enabling matatu drivers to happily remain behind the wheel for the entirety of the day, blithely ignoring the precepts of safe driving and common decency.

They barrel around corners blasting Dirty South to deafening volumes and entertaining their passengers with music videos even BET would censor. To be fair, some of the matatu operators opt for a more religious décor, adorning their vehicles with biblical slogans and images instead of the more typical spray-painted pictures of hip-hop stars and equally gangsta Kenyan politicians. But if you catch the T-Pain matatu, you best expect to get down to ‘Buy U a Drank’ and ‘I’m a Flirt’ because the music will match the décor. Apparently, the Transport Ministry recently enacted several reform laws meant to phase out the 14-seater matatus in favor of regular buses that would seat 25+, but even if the reforms are actually implemented, estimates suggest that it would still take at least ten years to completely remove them from Nairobi’s streets. 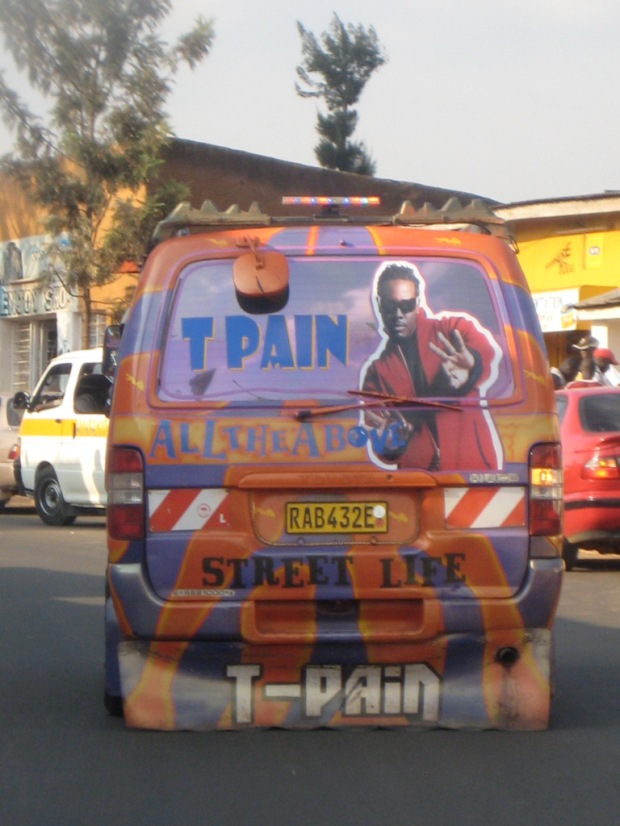 Actually taken in Rwanda, this matatu is representative of the ones cruising the streets of Nairobi.